Benefits Of Early Introduction To Music

September 25, 2017
Is it too late or too early for introducing music to your little one?

It's never too early for music in life.

Babies respond to sound from the time they are in their mother's womb. If you are a mom, I am sure you can relate to it.

Babies just love songs, rhythms and music and benefit from it just like grown-ups do from a musical environment. Scientists have found that the effect music has on the young minds of babies is far more significant than we can imagine. Various studies have shown that music affects the physical, emotional, and intellectual development of babies and children and strengthens cognitive and sensory development; not only does it improve speech but also reading, writing abilities and language skills per se.

An Early introduction to music can happen in the Womb, however, if you have missed it, its never too late. Your new born will love the music you play for him.
How music benefits the babies -

Memory- Music helps little babies remember things they have learnt or experienced before. In our case, A could relate to rhymes as early as 4-5 months.

Spatial Intelligence - It is the ability to perceive various relationships of spaces, for example,  kids who are exposed to music early in life can solve visual puzzles like shape-sorting and jigsaw easily and faster than those who have no musical exposure.

Emotional Intelligence - I am sure, you would agree that music brings out strong emotions. By listening to variety of music, babies improve their ability to understand moods and emotions of their own and that of others. Our little fellow showed contrasting responses to slow music and happy numbers. My gayatri mantra experience has already been shared in detail in my previous post.

Creativity- Playing with instruments is like an open ended play. There may be a certain way of playing an instrument, but letting the child play the way he wants to and explore the instruments will let him create his own magic and thus, honing his creativity. Also the sounds emanating from these instruments have a positive effect on human brain, enhancing creative abilities.

Language - Music and linguistic development is quite closely related. Both skills require similar understanding of speech and sound.  So, listening to music contributes greatly to babies’ development of language. 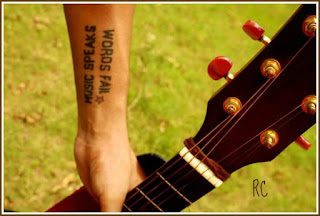 Popular posts from this blog

How to help your baby with speech?

November 19, 2017
"Nov you" "Owe you" Yes, I am waiting for my little man to say that, since he hasn't yet said "love you" to me, I am only guessing the sound of it (knowing he doesn't say "La" still) Like everything that happened on its own time, this too shall.  In my previous post ( Click here) I shared some bits from my baby's vocabulary and speech journey, each day I have something new to listen to and it only makes my smile wider. A child has her/his own time to meet the milestones, there is no magic wand to have them up n running and dancing and singing. Out of all the milestones speech has the widest range from 8-9 months to 24 months for their first words.  The two types of communication that a child uses are Receptive and Expressive. The Receptive communication means that he/she knows a particular word and Expressive communication is that they are able to speak or express it. For example, a baby may know what water is, but
9 comments
Read more

December 27, 2017
Hello people, The New Year is right here with lots of excitement, hopes and new beginnings, to welcome the coming year with swag and style, we have come together to bring plethora of fashion inspiration in this "Fashion-a-thon" a fashion blog-train initiative by Ruchie of Wigglingpen . Before you move ahead and see what I have in store for you please check out what Sayeri says on her lovely fashion blog--  Here . I have never been a fashion enthusiast, but who doesn't like wearing nice clothes and look good? I am someone who would rather accentuate a simple kurti with a heavy dupatta or a jacket or a top/tee with a shrug or scarf.  Although, I try not to splurge, but don't know how i end myself up in piles of clothes with still nothing to wear. If you have read my other posts you will know that I am trying to go the minimal way and hence I have almost limited my shopping; if i have to buy a dress for myself, I give away one or two from my wardrobe.
26 comments
Read more

December 19, 2017
Hair oiling/ head massage has always been difficult with this little ball of energy. He sits still for regular massage, but not for champi. We recently started using nourishing hair oil by Mamaearth and guess what? It is the lovely packaging that keeps him engaged.. mama sings "baba white sheep" spins a few stories around it and baby learns a few new things everytime while getting his champi (head massage) done with this awesome smelling hairoil. Jojoba oil in this hair oil helps in keeping the scalp healthy and avocado oil stimulates the hair growth. The oil with its unique concoction also treats cradle cap. More about the oil- Like all other Mamaearth products, this hair oil too is a MadeSafe certified product. MadeSafe certification is given to household products that are safe to use and do not pose any potential threat to health and environment.  The oil contains no mineral oils or artificial fragrances, key ingredients of the oil being - jojoba oil, coconut oil,
1 comment
Read more

notjustmommying
A breastfeeding, baby-wearing, co-sleeping and cloth diapering mumma. This blog is my attempt at sharing my views, muse and experiences!